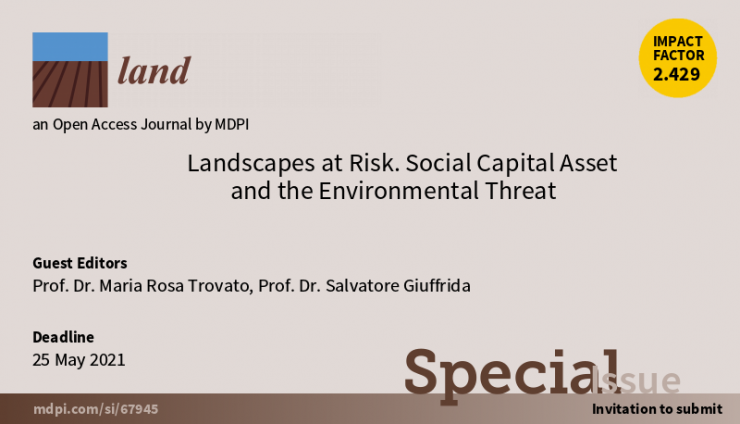 Deadline for manuscript submissions: 25 May 2021.

Up until the current pandemic, the terms “urban-scape” and “human-scape” have been assumed, described and practised as parallel dimensions of the territorial analysis, marginalising the knowledge and the evaluation of the landscape risk. This has always been associated, and often confused, with diverse forms of environmental risk, despite the fact that they represent some of the most important components of risk, but not its essence.

The relation between social capital and landscape deserves to be examined and represented in its entirety: as a matter of fact, while social capital has mainly been considered in the material, functional, economic and ethical dimensions, landscape has been examined in the perceptual, psychological, cultural and aesthetic dimensions.

Significant attempts to define a strong relation between capital and landscape have been conducted in the field of the “real estate-escape”—the real estate capital asset indeed shows the relationship between a monetary measurement (price) and an articulated and complex qualitative essence, which represents all of the attributes that market price is associated with.

Sudden and widespread environmental fluctuations, such as the one created by the arising and persisting current pandemic, significantly involve the relationship between the two main existential dimensions of the settled communities—social capital and landscape—and its possible representations by means of the economic–monetary dimension as well.

In view of a possible renewal of the relationship between people and the city–landscape system, very differentiated scenarios of the new territorial orders are prefigured; this renewal process territory, as its own institutional dimension, has the responsibility to solve its traditional contraposition to the environment, particularly through a renewed relationship between the attractors of the dense areas (cities) and the environmental hindrances (the plundered and neglected part of the rural and state-owned territory which is the main cause of environmental threat).

This Special Issue intends to foster an in-depth reflection from researchers in converging disciplines, and at different levels (theoretical, methodological and operational), on the essence and the possible overcoming of the conflict between some specific functions of the economic sub-system and landscape quality, with specific reference to the main criticalities already existing before the pandemic and to the possibility—prefigured by the new restraints—to rebuild their connections in order to reduce the landscape risk.

The 21st International Conference on Computational Science and its Applications